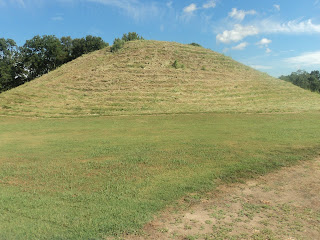 Directions to the trailhead: On the southeast side of Little Rock, take I-440 to US 165 (exit 7).  Exit and go south on US 165.  Drive US 165 south 12 miles to SR 386 and turn right on SR 386.  The park is 0.6 miles ahead on the right; park in the only parking lot.
The hike: Jutting up to 50 feet above the otherwise dead flat farmland of central Arkansas, the 18 mound complex protected as Toltec Mounds Archaeological State Park contains the tallest surviving ceremonial burial mounds in Arkansas.  The mounds were built by the Plum Bayou people, who lived in permanent villages throughout eastern and central Arkansas from 600 to 1050 AD.  The Plum Bayou people had a distinct culture from their contemporaries of the Mississippi River valley, and these mounds stood near the Plum Bayou's largest village.  Thus, much of what we know about the Plum Bayou people comes from archaeological work done at this site.
Despite the park's name, the Toltec people who lived 1000 years ago in present-day central Mexico have no known connection to this site.  The site was given the name Toltec by Mrs. Gilbert Knapp, who owned this land from 1857 to 1900 and mistakenly thought the Toltecs had built the mounds.  Although the mounds have attracted national interest for over 100 years, the state park was established only in 1975, and the mounds were designated a National Historic Landmark only in 1978.
Of course the mounds form the centerpiece of the 132-acre state park, but the park also features a Visitor Center with many informative interpretive exhibits and an Education Pavilion.  For hikers, the park offers two short trails that wind among the mounds: the paved ADA-accessible 0.8 mile Knapp Trail and the dirt 1.7 mile Plum Bayou Trail.  The two trails cross each other at several points, and the longer and more extensive Plum Bayou Trail is the route described here.
First stop in the Visitor Center or Education Pavilion to pick up a trail guide for the Plum Bayou Trail, then begin at the trailhead located between those two buildings.  After following the concrete entrance trail for a short distance, turn right to leave the concrete and begin the dirt Plum Bayou Trail.  Numbered posts correspond to entries in the trail guide, and marker #3 tells you that this portion of the trail follows an ancient embankment wall that used to stand 8-10 feet high and form a semicircle around the south side of the site.  Most of this hike will be hot and sunny in the summer, and the site's large mounds can be seen across the grassy plaza to the left,.
At 0.4 miles, the trail curves left as you pass through a small grove of oak trees near the south shore of Mound Lake.  I hiked here on a stifling hot and humid morning in late July, and shade from the trees and a breeze from the lake provided welcome relief from the heat.  Now heading south, lettered signs mark locations of former mounds that were destroyed by time and/or the farmer's plow.  Large amounts of goose droppings smattered the trail here on my hike.
Near 0.8 miles, you cross the two arms of the paved Knapp Trail and pass the two largest mounds.  Imagine all of the basketfuls of dirt that were dumped here to build these mounds!  Next the trail makes a loop through the southern corner of the park, which features some smaller mounds that have been excavated in attempts to learn more about the Plum Bayou culture.
Ignore the road that exits left and leads to the park superintendent's house, choosing rather to turn right and intersect the paved Knapp Trail at 1.2 miles. Turn left to head for the boardwalk over Mound Lake.  Mound Lake is an oxbow lake that was the channel of the Arkansas River some 4000 years ago.  The Arkansas River now runs almost 4 miles north of here.  Parts of the boardwalk were closed for repair on my visit, but the lake breeze and shade from the shallow water's cypress trees made the boardwalk a pleasant spot.
On the other side of the boardwalk, the Knapp and Plum Bayou Trails run conjointly on a concrete surface for the rest of the hike.  When the Knapp Trail closes its loop, turn left to return to the parking lot and complete the hike.  Make sure you stop in the Visitor Center and view its exhibits on your way out if you did not do so before.
Posted by Mathprofhiker at 2:31 PM No comments: 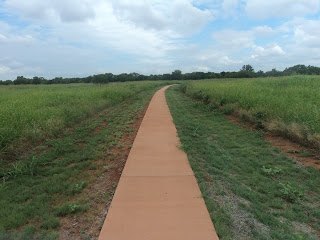 Directions to the trailhead: From Sayre, take US 283 north 23 miles to the town of Cheyenne and an intersection with SR 47.  Turn left on SR 47.  Drive SR 47 west 0.9 miles to SR 47A and turn right on SR 47A.  The parking lot for the battlefield is 1.2 miles ahead on the right.  Park in the only parking lot.
The hike: When most people think of American wars of the 1860's, only the Civil War comes to mind.  Yet on the United States' western frontier another sequence of conflicts was raging that are collectively sometimes called the American Indian Wars.  In 1868, the focus of the American Indian Wars turned to the high southern plains when the US Cavalry attempted to displace Arapaho, Comanche, and Cheyenne settlements along the Saline, Solomon, and Washita Rivers of present-day western Kansas and Oklahoma.  The Cavalry's goal was to end the threat of guerilla-style attacks on American settlers.
One of 1868's most decisive battles occurred on November 27 at a Cheyenne winter camp along western Oklahoma's Washita River.  The US Cavalry was led by Lt. Col. George Armstrong Custer, who would later endure the infamous defeat at Little Bighorn.  The Cheyenne camp's Chief was Black Kettle, who desired to make peace with the Americans in light of the Cheyenne warriors' inferior numbers and firepower.  Although Black Kettle realized Custer's cavalry threat, a foot of snow had fallen the previous day, and Black Kettle decided not to move his winter camp to a more secure location because he knew US Army convention was not to march in bad weather.
Unfortunately for Black Kettle and the Cheyenne, Custer was not a conventional leader, and before dawn Custer's cavalry charged across the Washita River and ambushed the village while the Cheyenne still slept.  The "battle" that ensued was more a rout than a battle, and 30-60 Cheyenne were killed including Black Kettle while the US Cavalry sustained only 1 fatality.  Less than a year later, defeat at the Battle of Summit Springs in northeastern Colorado effectively ended the Cheyenne's ability to fight.
Today the site of Black Kettle's winter camp along the Washita River is preserved within 315-acre Washita Battlefield National Historic Site, which was established only in 1996.  The historic site is jointly managed with and completely surrounded by Black Kettle National Grassland, which is named after the Cheyenne leader.  In terms of recreation, the historic site offers only a picnic area and the short hiking trail described here, but the trail is a good one that loops through the heart of the Cheyenne camp site.
From the parking area, follow the concrete trail past the large dedication stone and picnic shelter as it curves left and passes through a gate in a wooden fence.  A box just past the gate contains some very informative trail guides that do an excellent job of describing the Cheyenne camp and the battle.  Unlike the paper pamphlets available at many parks, these trail guides are bound in plastic covers and designed to be reused.  Be sure to take a guide and then return it after your hike.
The concrete trail winds gradually downhill through sunny grassland passing many numbered posts that correspond to the interpretive guide mentioned above.  This grassland was alive with grasshoppers and anthills on the warm cloudy late July afternoon that I hiked here, a reminder of this land's harsh environment.  At 0.3 miles, the concrete trail splits at a bench and a sign indicating Lower and Upper Trails.  Angle left to begin hiking the Lower Trail.
The Lower Trail forms a nearly flat loop through the historic Cheyenne campsite in the Washita River's floodplain.  Like any prairie river, the Washita River has changed its course many times over the past 150 years, and thus the exact location of the camp is uncertain.  One of the numbered interpretive posts marks the camp's most probable location.  A few prairie wildflowers were in bloom on my visit, but thick vegetation precluded any Washita River views.
The concrete ends about halfway around the Lower Trail's loop, and at 0.9 miles you reach the end of the Lower Trail only about 100 feet from the bench at its beginning.  Turn left here to begin the Upper Trail.  The Upper Trail climbs slowly but methodically out of the Washita River's floodplain, and it briefly follows what appears to be an old road or railroad grade during the ascent.  More grassland walking brings you back to the wooden fence and gate at this hike's trailhead.  Turn left and retrace your steps along the concrete path to complete the hike.
Posted by Mathprofhiker at 8:04 PM No comments: 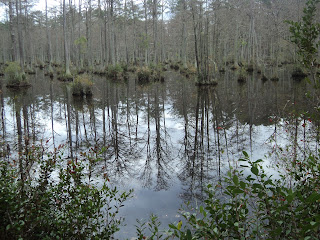