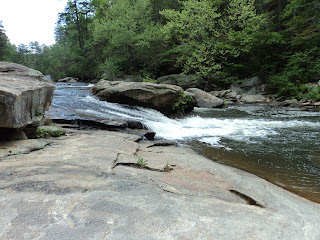 Directions to the trailhead: From downtown , take US 76 west 3 miles to and the signed park entrance.  Turn left on   Drive another 0.3 miles to the parking area and information board in front of the park office.  Park here, or drive down a switchback to a smaller parking area right beside the creek.  The hike starts at the smaller, lower parking area.

The hike: Though only 24 miles in length, the  is one of the most dramatic and scenic rivers in .  The river loses over 700 feet of elevation in its short length, creating a plethora of cascades and small waterfalls.  The Class III-V rapids make the river a mecca for canoeists and kayakers especially after a heavy spring rainfall.  The river actually qualifies for National Wild and  status, but in 1985 the United States Forest Service decided against giving it this designation due to its close geographical proximity to the likewise designated .
One popular access point for whitewater enthusiasts is .  Situated on 200 acres in southern ,  derives its unusual name from its location at the confluence of Ramsay Creek and the .  In addition to river access, the park features a small campground, a beach, several picnic shelters, and an old scout cabin.
Though  operates four parks, Chau Ram is the only one with a well-developed system of hiking trails.  The trail system at Chau Ram consists of two main loops on the west side of the : a blue-blazed Upper Loop Trail and the orange-blazed Lower Loop Trail.  This hike uses parts of both trails to give a grand tour of the park.
The scenery begins before you even start the hike.  If you walk to the rear of the smaller lower parking area, you will find a postcard view of 40-foot , the largest waterfall in the park.  Water drops over several rock terraces before making a final drop into a medium sized plunge pool.  Ramsay Creek does not have as much water volume as the , but the size of the rock terraces and the surrounding greenery make this a very attractive waterfall.
Once you manage to tear yourself away from the waterfall, the hike starts by crossing two bridges.  The first bridge is a wood and steel bridge over Ramsay Creek, and the second bridge is suspended from steel cables over the .  The suspension bridge sways somewhat, but if you keep stepping forward you should make it across without incident.
At the far side of the suspension bridge, you reach the park’s main trail intersection.  The Lower Loop Trail exits left, and the Cabin Trail exits straight, heading uphill.  This hike will turn right to begin the blue-blazed Upper Loop Trail.
The Upper Loop Trail at first stays at river level as it heads upstream with the river on the right and the hillside rising steeply to the left.  The small rapid in the river here is called Pumphouse Rapid, and 0.2 miles into the hike you learn why.  The green metal structure you see in the river near the opposite bank contains mechanisms that pump water out of the  and up a water pipe that leads toward .  I could hear the pump working away on my late afternoon visit to this park.
The trail continues upstream alternating between river level and 50 feet above the river.  The trail surface is mostly dirt, but a couple of areas take you over bare rock.  At 0.4 miles, a side trail exits left and leads uphill to the old Scout Cabin.  This hike continues straight to remain on the Upper Loop Trail.
Past the cabin turnoff, the trail gets narrower and the blue blazes become fainter.  Poison ivy also makes an appearance beside the trail.  Just when you start to think you might have made a wrong turn, a wooden staircase leads uphill to the left as the US 76 bridge over the Chauga River comes into sight in front of and above you.  Climb the stairs, then climb steeply for a few more seconds to reach an old road, where the faint blue blazes turn left.  With the worst of the trail conditions now behind you, turn left to begin following the wide old campground road.
After passing through a steep ravine, the trail reaches the edge of a grassy clearing that marks the site of the old camp.  The trail does not enter the clearing, but instead it turns right to remain in the edge of the forest with the grassy area to the left.  Watch for the blue blazes to find this turn.
Just over 1 mile into the hike, you reach a major trail intersection.  Continuing straight on the blue-blazed Upper Loop Trail would take you back to the suspension bridge in another 0.2 miles.  For the grand tour and to see more scenic cascades in the river, turn right and begin the orange-blazed Lower Loop Trail.
The Lower Loop Trail heads west at first clinging to the hilltop but then dropping at a moderate to steep grade to reach river level.  Some trash cans here tell you that you are near the developed part of the park.  Some spur trails lead down to the river to give close-up views of the rapids.  Take at least one of the trails to fully appreciate the river’s scenery.
Back on the main trail, the trail heads upstream with the occasionally calm and occasionally whitewater river on your right.  For the most part the trail stays in the mixed deciduous and hemlock forest, but for a short bit you will be walking on bare rock right beside a rapid called Can Opener.  All too soon, the suspension bridge over the river comes into view, signaling that the end of the hike is near.  After arriving back at the main trail intersection, a left turn will take you across first the suspension bridge and then the wood/steel bridge to return you to the lower parking area and complete the hike.
Posted by Mathprofhiker at 11:28 AM 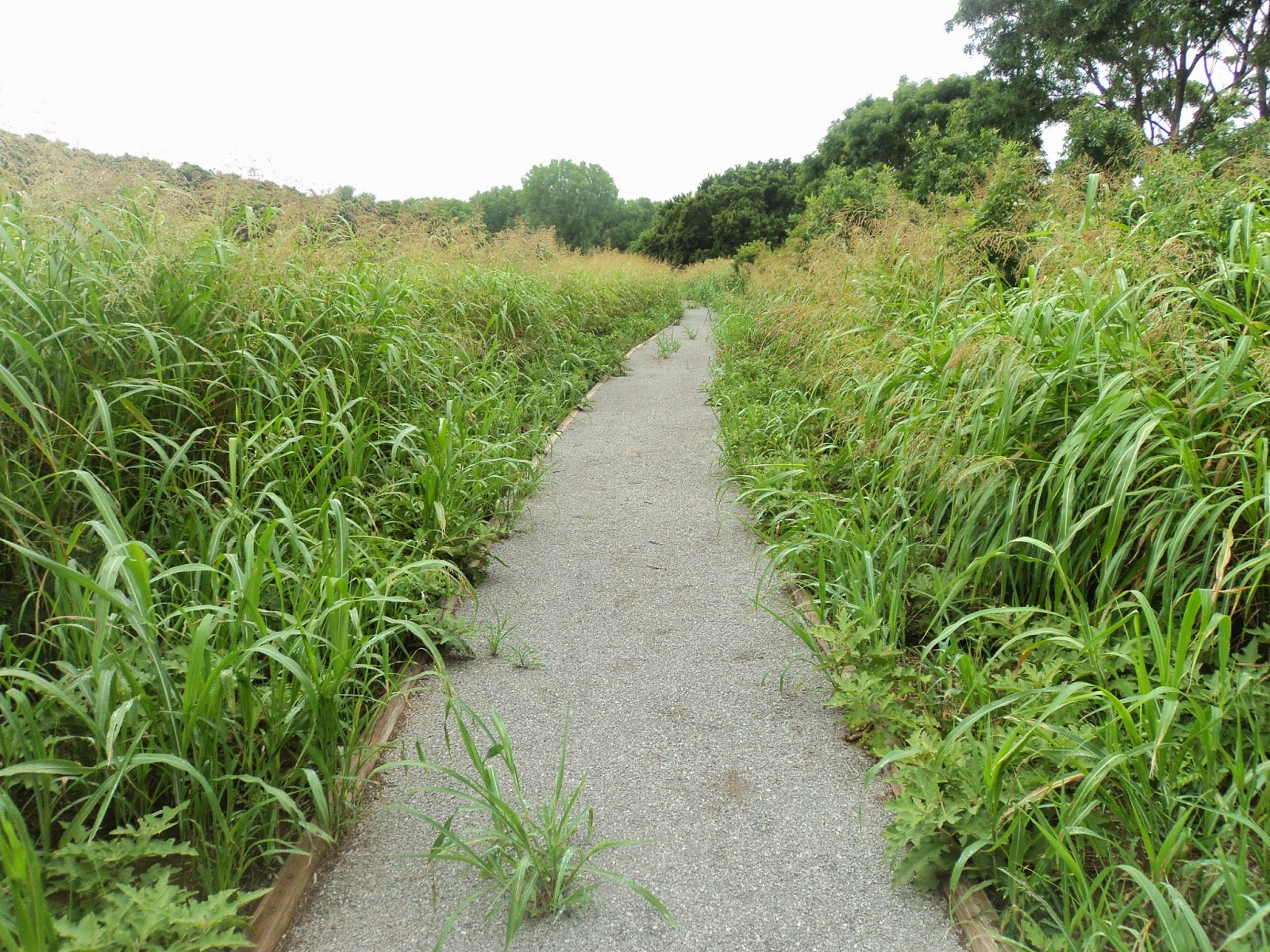